Can the HomePod be Housetrained?

The announcement of the Apple HomePod immediately interested me, as I find myself serving as both the “office audio guru” and “generally interested in home automation” guy. While watching the WWDC Keynote speeches, I rewinded and reviewed multiple aspects of the HomePod reveal –

I’ve been waiting for this product; I knew it was only a matter of time. I purchased an Ecobee3 last year specifically because it supports Apple’s HomeKit – a home automation protocol for smart devices. There are many other devices that now support HomeKit, so it’s apparent that Apple is slowly but surely working its way into the “Smart Home” territory. HomeKit has been nascent due to licensing requirements but articles like this bolster my faith that Apple is beginning to understand the importance of home automation and allowing developers to experiment freely with it. Still, HomeKit has a bit of a hill to climb because Alexa is dominating the home control space for a variety of reasons.

The keynote speech about the HomePod put much more emphasis on this device being a speaker with smart capabilities rather than a smart speaker. Indeed, after reviewing all of the currently available information on how it’s built, it is definitely an intriguing piece of hardware. Why would a speaker need an A8 processor on board? What’s with all the microphones and “tweeters”? 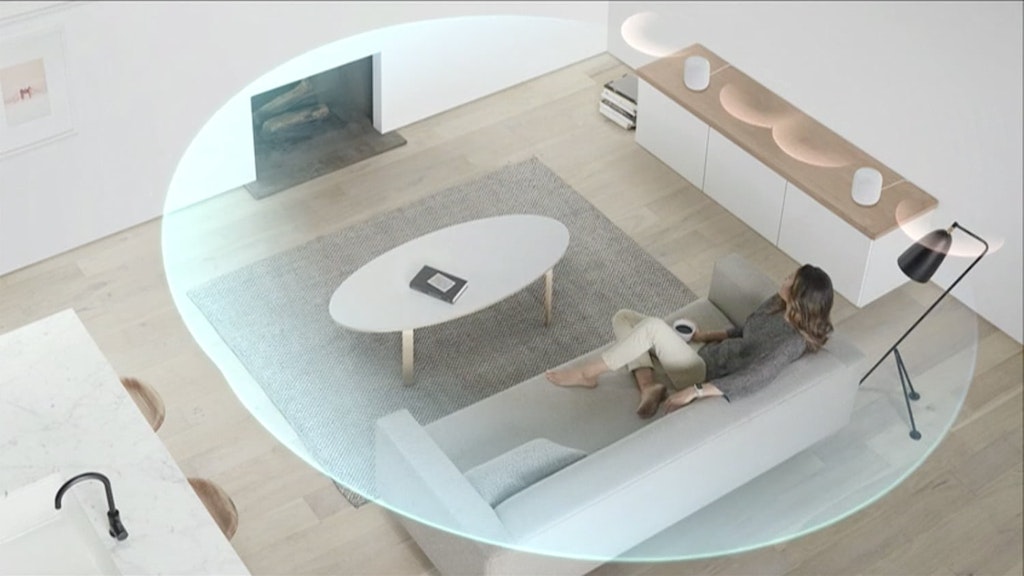 Beamforming – what is this dark magic?

Firstly, there are the beamforming microphones. To simplify, beamforming with microphones works a bit like modern radar systems. An array of microphones is placed around the circumference of the HomePod constantly listening for “Hey Siri.” When one or more of the microphones pick up this command, the hardware in the HomePod calculates for multiple things like which direction the strongest version of that command came from, how the sound was possibly reflected, if there appears to be background noise to be filtered out, etc. It processes this and other information from the incoming voice command to essentially create more microphone sensitivity in a specific direction. This means the commands you utter in its general direction – or even from another room – have a higher likelihood of being heard and understood.

That’s half of what the HomePod is using beamforming for. This is not unusual in the current crop of smart speakers; both the Amazon Echo/Dot and the Google Home use this same technology to increase their device’s ability to quickly and accurately understand voice commands. Amazon has even recently begun releasing a beamforming dev kit for developers to create new Alexa devices with. 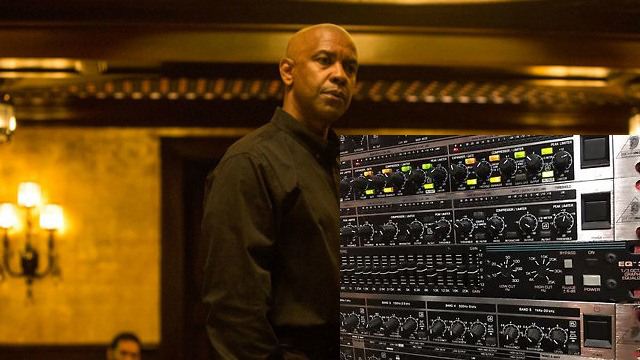 The second part is something that’s been available in high end audio equipment for decades. This is typically called automatic room equalization, but manufacturers like to put their own name and spin on the tech. The general idea is that the device producing sound has a microphone which listens for sound echoes and peaks or valleys in the expected sound signature, then it times how long it takes for the sounds to be played/received. This allows a specialized processor to determine how far away the device is from the microphones, and if objects in the room are reflecting sounds.

The processor doing the work listens to the different frequencies being played, and determines if some portions of those frequencies are being more emphasized than others. It can then change the way sounds are reproduced so no part of the audible spectrum is louder than another. This creates a “flatter” speaker output.

This is where the power of the A8 is needed. While it analyzes these aspects of the song, it is also listening to how those sounds are being reflected back to the HomePod. Using an array of 7 tweeters, it can then project different portions of the audio spectrum in different directions, and place more or less emphasis on instrumental sections of the song. The HomePod is likely doing this frequently as music is playing, always collecting room information and then forming the audio to fit. In the case of home theater equipment, this collection and calibration is done once and is not done to “enhance” a particular song. This is a twist on existing technology and, while not groundbreaking, it definitely pushes the HomePod into a new territory as a speaker that recognizes your music, and attempts to make multiple corrections to how the music is emitted, leading to a more engaging experience. 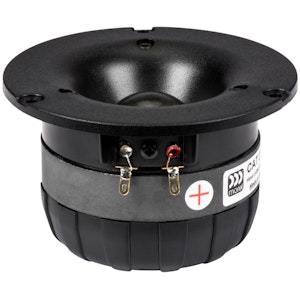 Another intriguing aspect of the HomePod is that Apple is using horn loaded tweeters. Seven of them. An example of a horn loaded tweeter looks like this, although most are not square. The logic behind the “horn” is that it acts as a waveguide. It channels the audio waves into a particular pattern and increases their accuracy when you are not directly in front of them.

The purpose of the square horn design has to do with typical room construction. A square horn loaded tweeter seeks to diminish sound refraction at the corners of a room by shaping the sound wave into a square instead of a circle.

Looking at the renderings Apple has shown, it’s likely that the tweeters are actually facing inward instead of outward. It appears that the tweeters are all facing a central waveguide shaped like a downward facing horn. The intent is to increase sound dispersion by reflecting the waves off of a compound curved surface.

Additionally, each tweeter in the array is independently controlled, and all 7 participate in beamforming audio output. Similar to the beamforming microphones, the HomePod can determine where reflective surfaces are, and attempt to reduce or even increase audio output facing those surfaces. This would help explain the reports that the HomePod sounds the same wherever you are in a room. 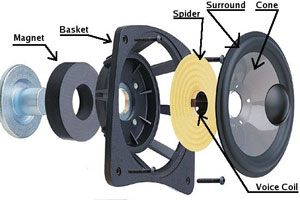 Bass in your Face (or not)

The subwoofer built into the HomePod is intriguing, and I’ll be very curious to learn more about its construction and amplification. Along with the 7 tweeter array, the woofer in the HomePod is also being monitored and changed to suit room acoustics. Apple is stating that the woofer is a 4” high-excursion type. This means that the sound-producing surface of the woofer cone is 4” across, and the flexible rubber ring surrounding it is larger than typical for a 4” speaker. The effect of this is that the woofer can move up and down further distances. All speakers move air -that’s how they produce sound, by creating vibrations in the air. Woofers have the fun job of moving a LOT of air in order for you to hear their bass notes. No details are yet available regarding the amplifier circuitry for the subwoofer but my guess is it’s in the 25-40 watt range.

Personally I have yet to hear any woofer smaller than 6” that can produce acceptably deep bass but there many, many factors which can affect that. Apple may be using a combination of room equalization combined with an automatic EQ that attempts to increase the loudness of frequencies that a 4” woofer has an extremely hard time producing.

In-person reports state that the bass notes from the HomePod are full and lively. Not chest pounding, but definitely there and definitely articulate. If Apple is doing things right, they’re focusing on quality over quantity here. It’s easy enough to produce booming noises from a subwoofer, but to produce recognizable textures in bass notes is a different animal. That requires proper speaker and enclosure design as well as good amplification.

AirPlay2, Is It You?

A curious thing which will hopefully be clarified in the near future is that the HomePod only supports WiFi connectivity. No Bluetooth is available. This means that you must connect to the HomePod using the newly announced AirPlay2. Airplay2 will purportedly allow system level integration in iOS. To the layman, this means that apps such as Youtube and Spotify may have a chance at casting their content to the HomePod. The only supported music app that’s been announced currently is AppleMusic, a direct competitor to things like Spotify, Google Music, Pandora, etc…

The downside to this is that Android devices will require special software to support AirPlay. Depending on the AirPlay enabling app you use, you may be limited in which other apps can be streamed out via AirPlay. It’s also been noted that older Apple devices will require a firmware and/or software upgrade to use AirPlay2. 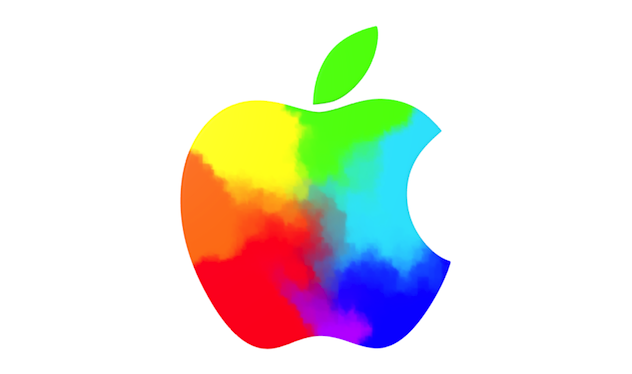 There’s speculation that the entire purpose of the HomePod isn’t to compete with Alexa or Google Assistant but to gain traction with AppleMusic. Personally, you’ll see me stop using Spotify when my Top Ramen supply runs out and I don’t have the money for a mobile phone bill. With Alexa currently crushing the home assistant space, it’s going to take a major leap for the HomePod to start stealing sales. Especially at their $50 vs $350 price points, along with the current extensibility of Alexa with “skills,” Apple is definitely going to have to play catch-up for a while.

So what is the HomePod? Is it a fancy speaker with Siri integration? Is it a trojan horse to increase subscribership in AppleMusic? Is it a home control device that happens to have a great audio experience? Is it Apple’s entrance into the home theater market?

My guess is that it’s all of these things and one or two more.

In the past ten years of practicing QA in mobile software along the west coast of the United States, Adam has honed a dizzying array of martial kata for doling out street justice to dirty code. If there's one thing Adam doesn't like, it's software that needs to be taught a lesson. It's a hard way of life but someone has to do it. Adam also happens to be a multi-faceted individual interested in Hi-Fi audio, cars, futurism, art, Industrial Design, the perfect breakfast burrito, EDM, and DIY.